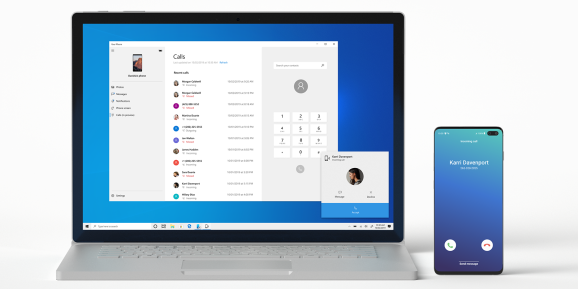 At Samsung’s Galaxy Unpacked 2019 in August and the Surface hardware event last week, Microsoft talked about Windows 10’s Your Phone app getting a new Calls feature. Today, the company is letting Windows Insiders start testing an early preview of Android calling on Windows 10.

Having given up on Windows Phone, Microsoft has increasingly poured more resources into Android as its mobile platform of choice. The company offers plenty of Android apps and features, including some that it can’t match on Apple’s more restricted iOS platform. Last week, Microsoft even unveiled the dual-screen Surface Neo Android phone, coming in holiday 2020.

Your Phone is part of Microsoft’s Continue on PC functionality, which lets you send a task from your Android or iOS device to Windows 10. The app’s main purpose is to let you access your phone’s content — like text messages, photos, and notifications — right on your PC. The feature first arrived with the Windows 10 Fall Creators Update in October 2017, and Microsoft has been broadening it ever since.

Calling support means you no longer have to grab your Android phone to answer a call when you’re at your computer. You can interact with the call using your PC’s speakers, microphone, and screen. Your Phone’s Calls feature supports the following:

Your Phone’s new calling feature requires a phone running Android 7.0 or higher, a Windows 10 PC with Bluetooth radio, and Windows 10 build 18362.356 or higher. Microsoft is rolling out the feature gradually to Windows Insiders on 19H1 builds or newer, so don’t worry if you don’t see it in the Your Phone app just yet. Since this is an early preview, you may also to unpair and pair your phone and PC again.

Also today, Microsoft released a new Windows 10 preview build. The update bumps Windows 10 from build 189995 (made available to testers on October 8) to build 18999. These builds are from the 20H1 branch, which represents the Windows 10 update that will arrive in the first half of next year, possibly as the Windows 10 May 2020 Update.

This 20H1 build includes the following bug fixes and improvements:

This build has only one known issue:

As always, don’t install this on your production machine.